Prostate cancer is cancer that occurs in the prostate — a small walnut-shaped gland in men that produces the seminal fluid that nourishes and transports sperm.

For most men with prostate cancer, treatment can remove or destroy cancer. Completing treatment can be both stressful and exciting. You may be relieved to finish treatment, but find it hard not to worry about cancer growing or coming back. This is very common if you’ve had cancer. 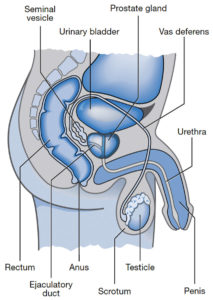 Prostate cancer that’s more advanced may cause signs and symptoms such as:

The causes of prostate cancer are not yet fully understood. However, we know that some factors are associated with an increased risk of developing prostate cancer.

The major risk factors of prostate cancer include:

Results from studies on other risk factors are inconclusive.

Staging takes into account the size and extent of a tumor and the scale of the metastasis. At Stage 0, the tumor has neither spread from the prostate gland nor invaded deeply into it. At Stage 4, cancer has spread to distant sites and organs.

A doctor will usually do a blood test and/or physical examination to check the health of the prostate.

Prostate cancer usually starts in the glandular cells. This is known as adenocarcinoma. Tiny changes occur in the shape and size of the prostate gland cells, known as prostatic intraepithelial neoplasia (PIN). This tends to happen slowly and does not show symptoms until further into the progression.

How to lower risk of prostate cancer:

If you have (or have had) prostate cancer, you probably want to know if there are things you can do that might lower your risk of the cancer growing or come back, such as :

Despite the best efforts of surgeons and radiation oncologists, it is nearly impossible for a man to retain his ability to father children through sexual intercourse after initial treatment. During prostatectomy, both the prostate and the nearby seminal vesicles are removed. The seminal vesicles are two small structures that lie at the base of the bladder. Together with the prostate, they provide semen that carries the sperm down the urethra and out the penis during ejaculation. The loss of semen following surgery makes ejaculation impossible, so the sperm cannot physically make it out of the body to reach the woman’s egg for fertilization.

With radiation therapy, fertility is nearly always impaired. Radiated prostate cells and seminal vesicles tend to produce semen that cannot transport the sperm well. In addition, the sperm, which is made and housed in the testicles, can be damaged, but this is seen far less frequently with more accurate dose planning.

There are self-care strategies that may aid in helping to prevent prostate cancer, the third most common cause of cancer-related death in men. We have listed few beneficial home-remedies for prostate cancer, Scroll down to know benefits:

Nettle root is sometimes used in combination with saw palmetto.

Pumpkin seeds contain beta-sitosterol, a compound similar to cholesterol and found in some plants. Preliminary studies have shown that beta-sitosterol may improve urine flow and reduce the amount of urine left in the bladder after urination.

Green tea has a lot of antioxidants called catechins that have been shown to enhance the immune system and potentially slow the progression of prostate cancer.

Foods rich in omega-3 fatty acids, including most fish and some nuts and seeds, such as hemp and chia

The wealth of variety in the cruciferous vegetable category makes eating these prostate cancer killers an easy habit to adopt. The broccoli, kale, cauliflower, Brussel sprouts, and other members of this group are rich in a phytochemical known as DIM (3,3’-diindolylmethane). DIM has been shown to be effective in inhibiting an enzyme involved in prostate cancer cell growth and cell suicide (apoptosis) while not impacting healthy cells. Cruciferous vegetables also harbour indole-3-carbinol (I3C), a phytochemical that protects DNA from damage, promotes apoptosis and prevents the growth of cancer cells.

This bio-active ingredient found in the spice turmeric has been widely studied for its anticancer properties. Curcumin has been shown to fight prostate cancer on several fronts.

Hope this blog was informative, if you find any of the above symptoms, consult a doctor soon…