Glittery Green eyes on Fatima’s face are irresistible. This 4-year –old kid from Awantabhawan, Soura seems to be living in her own fantasy world. She giggles frequently while playing a game of “pica-boo” with her mother. Fatima doesn’t respond as normal kids do. The only thing that excites her is the melodious lullaby on her mother’s phone.

She always tries to match the lyrics of her favorite rhyme but her medical condition doesn’t allow her to even complete its first line. Her gestures flout her age! As Fatima is no ordinary child. Fatima is a specially-abled child and was diagnosed with autism when she was eight months old. 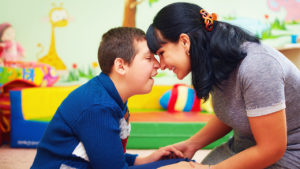 Autism or Autism spectrum disorder (ASD) is a term used for developmental disorders. A person suffering from Autism is characterized by problems with communication, social interaction, cognition, imagination and intuitive thought.

Autism is a neurodevelopmental disability that affects the way a person can communicate with and relate to other people. It manifests in children by the time they reach the age of three.

This disorder can be found anywhere but it occurs occur more often in boys than in girls, with a 4 to 1 male-to-female ratio.

Symptoms of Autism are usually visible during early childhood, between 12 and 24 months of age. However, in certain cases, they may appear later.

2) Frequent use of set words and phrases.

3) Speech that sounds monotonous or flat.

5) Not responding to their name being called.

6) Rejecting cuddles initiated by a parent or caregiver.

8) Little interest in interacting with other people, including children of similar age.

9) Preferring to play alone, rather than asking others to play with them.

Though number of researches has been conducted to know the exact cause of Autism still we can’t depict the actual cause. Most researchers believe certain genes inherited by children from their parents could make them more vulnerable to developing ASD.

Some of the suspected risk factors for autism include:

ASD can be diagnosed with different screenings, genetic tests, and evaluations.

As such, there is no specific treatment for autism, but therapies and counseling sessions can help a patient to some extent alleviate their symptoms.

Different types of therapies include:

These therapies range from medical intervention to behavioral exercises to develop social skills. Experts estimate that every 2-6 children out of 1000 have Autism. The prevalence rate of Autism in the Kashmir has been estimated as 1 in 250. Besides hardships faced by Autistic kids, they are gifted in certain talents, they have some extraordinary creativity in them.

Medical research states that Autistic children display certain musical or mathematical abilities that most adults will never master, “even with years of dedicated practice.” So live the way you are, sometimes it is beautiful to be different.