As per Wikipedia, Dementia is a broad category of brain diseases that cause a long-term and often a gradual decrease in the ability to think and remember that is so severe to the extent of affecting a person’s daily functioning. Alzheimer’s is the most common type of dementia affecting 60%-70% of the cases.

According to a survey, someone in the world develops dementia every 3 seconds. There were an estimated 50 million people living with dementia in 2017.  This number is expected to reach 75 million by 2030! Alzheimer’s is a global disease demanding a global framework for action on it. 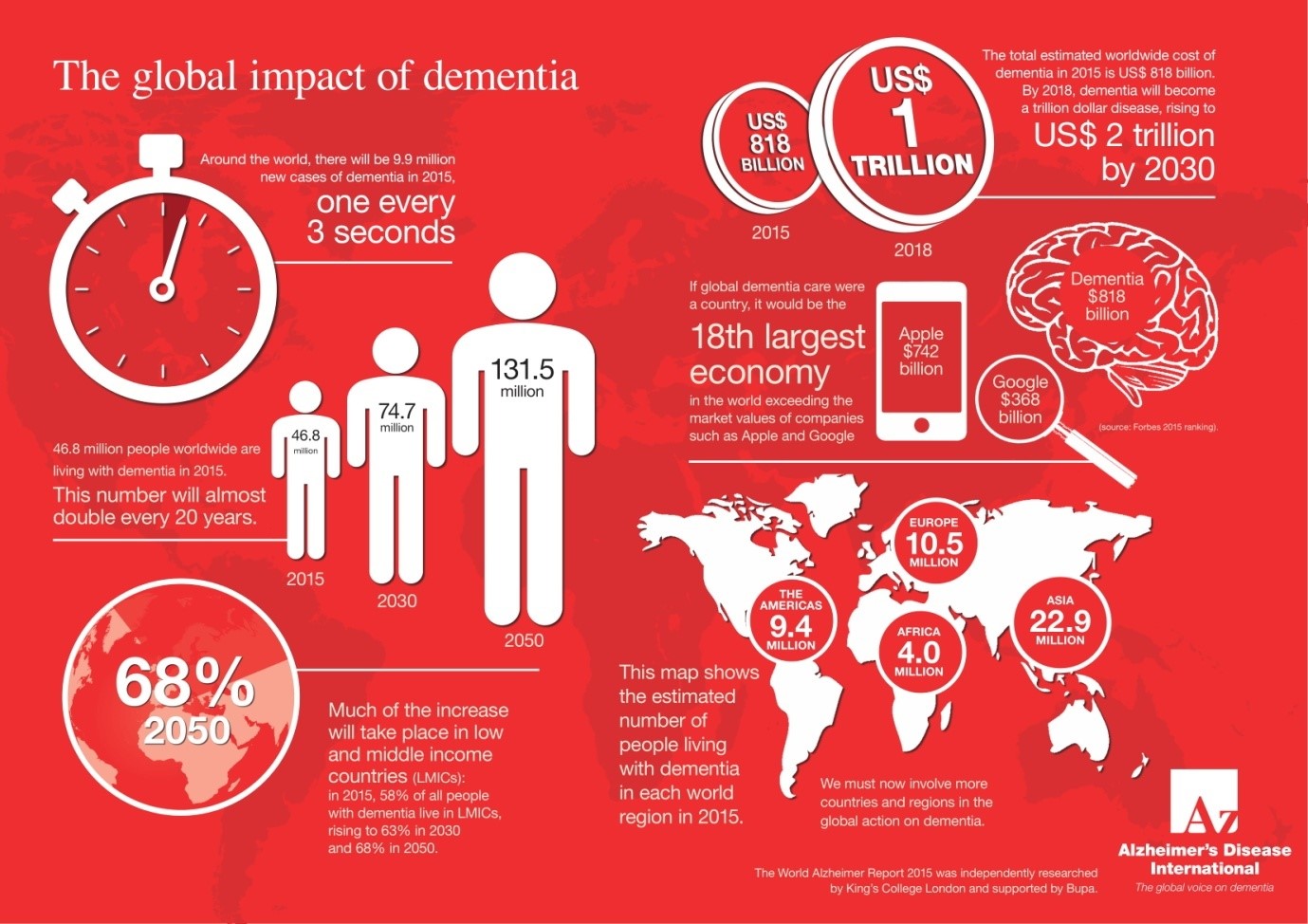 The above infographic shows the global impact of Dementia worldwide. Read on to learn more about Alzheimer’s disease.

The Three Stages of Dementia

If your loved one is going through Dementia, then to give the proper care you should know about the stages of Dementia. Knowing them will help you provide the best suitable care to the patient.

This stage of Dementia is often overlooked because the onset is gradual. Symptoms are:

As the person moves from the early stage to the middle stage, symptoms become clearer. These include:

In this stage, memory disturbances become more serious and symptoms become obvious. These include:

Alzheimer’s disease is by far the most common & well-known type of Dementia. It affects 60%-70% of the cases. This is heavily researched and various treatments have been investigated.

Vascular Dementia is another kind of Dementia which is also known as “multi-infarct Dementia”. It is the second most common form of Dementia.

The third most common form of Dementia is Lewy Body Dementia. It is generally caused by improper proteins that appear in nerve cells and impair functioning.

Frontotemporal Dementia is the fourth most common type of Dementia but it is fairly rare. Memory is preserved but it causes behavioural changes.

Other forms of Dementia that cause cognitive impairment are Parkinson’s disease, Huntington’s disease, and Creutzfeldt-Jacob disease. 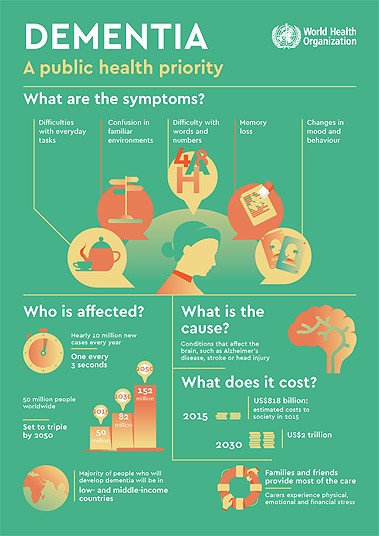 It is still unknown what actually causes the deterioration of brain cells but there are some known factors that are known to trigger the development of Alzheimer’s disease. These are described below:

Ageing is the greatest factor in the development of Alzheimer’s disease. The risk of dementia grows after the age of 65 years although symptoms before the age of 65 account for up to 9% of the cases.

Alzheimer’s disease can also be inherited if there is a history of the disease in the family. Genes also play a role in the development of Dementia since they are passed down from generation to generation.

There are certain lifestyle factors that can increase the risk of Alzheimer’s disease. Some of them are:

Improving your lifestyle can greatly reduce the risk of Alzheimer’s disease. You can do the following things.

Regular exercise has been found to greatly reduce the risk of this disease. You should do exercise for 30 minutes at least 3 days per week.

Having a proper diet

Evidence suggests that having a better and improved sleep can help prevent Alzheimer’s. You should sleep for at least 7-8 hours per night.

It all depends on our lifestyle. So, lead a better and healthy life. Take care!